Reinhold Bogner has designed guitar amps long before he left Germany in 1989. His tuned Marshalls are legendary and collector's item till nowadays. After his migration to Los Angeles many famous guitarists like Steve Stevens, Dan Huff, Allan Holdsworth, Mike Landau and Steve Vai have trusted in his ability to modifiy amps. Eddi Van Halen has encouraged Reinhold to overhaul and reanimate his Marshall Plexi.
Eddi was delighted - Bogner Amplification was born! 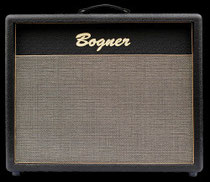 "There must be something special in the electrons surrounding the city of Ulm, Germany, which is located between Stuttgart and Munich in the south of Germany. It's not only the birthplace of the iconic EL84 tube but also of famed amp designer Reinhold Bogner.

Reinhold grew up in a house filled with science, the love of electronic history and countless ancient analog electronic devices fueled by vacuum tubes. You see, his father Gerhard Bogner collected all manner of historic tube radios and audio test equipment made within the last 150 years. This was the era when tubes were found within just about every electric device.

His father, an engineer for Telefunken, also repaired TVs and transmitters for the military, kept piles of resistors, capacitors and, of course, endless vacuum tubes everywhere in the house. And perhaps, unknowingly, quietly passed down his sense of analog wonderment to his young son.

Rumor has it that Mullard and Brimar were some of Reinhold's first spoken words. And if they could have put baby milk into a big bottle KT88 tube, little baby Reinhold surely would have drunk from that multi-pin glass bottle. One time, as an unruly four year old, Reinhold tipped over a shelf filled with his fathers carbon comp resistors. The disciplinary direction, for creating the huge mess, was to memorize the resistor color code even before he could spell. You could say Reinhold was born with both the DNA and a hand-wired brain to love all things analog, esp tubes, and you'd be right.

Reinhold loved music, especially rock music. He was mesmerized by the thunder and power of his favorite musician's souls being delivered through a guitar, cord and cranked amp. And at around 13 years old, he found out through his guitar playing friend that most good guitar amps were actually made using tubes. He instantly saw the connection of all the tube related gear that surrounded him since childhood to the heavy, iconic guitar tones leaping from his stereo speakers. Now, his future was clear and in focus.

Soon after this profound moment he bought a cheap guitar but didn't have enough money to purchase an amp, so, he decided to build his own. After digging around his father's shop, Reinhold managed to scavenge enough parts to build his first prototype. Even though he had amp schematics from the local music store, he didn't have all the correct components, so he improvised with substitutions. Quickly he learned that changing the values of various components could dramatically alter an amps tone, feel and response. This was a massive revelation! Reinhold now understood that amp circuits were not "locked in stone", but rather, fluid and could be shaped much like artist's clay or paint. The circuit and components became his canvas, the solder iron his brush, and that any tonal color his heart desired could be splashed onto this sonic canvas. Finally, Reinhold's wild creative power and artistry had been set free. He was determined to capture the sounds he heard from within and give them life so that others could hear them.

Upon hearing Reinhold's inspired designs local players began asking for their amplifiers to be modified to sound just as incredible. They also encouraged him to reach a much wider audience, so Reinhold began sneaking into every possible soundcheck hoping bands would try his amp. Often he would travel hours to a concert, and with no entrance ticket, discover a way into the venue to meet the techs, roadies or the players themselves. The overwhelming response was always the same: Reinhold's amplifiers should he heard by the great session and touring guitarists living in Southern California. So, with $600 in his pocket, a heavily modified JCM 800 under his arm, and a million great design concepts in his brain, Reinhold and his dream boarded a Lufthansa jet headed to Los Angeles.

After arriving in Venice Beach, and having no car, Reinhold, along with his modified amp, took three city buses to Andy Brauer's Studio Rentals in North Hollywood. Andy's thriving gear rental business was the crossroads of incredible vintage equipment and pretty much every A-list session and touring guitarist of that era. All around Andy's shop were the best sonic examples of every vintage guitar, amp and effect known, and Reinhold fearlessly stepped right into that Hornets nest of tone. Andy was extremely impressed with Reinhold's tonal shaping abilities and word spread quickly to every session and touring musician that a gifted German amp designer now lived in Los Angeles. Oh, and that heavily modified JCM 800 that Reinhold brought from over Germany was purchased by Edward Van Halen for $600 and a Frankenstein Strat.

Reinhold settled into his new life quickly and began modifying and building amps for many highly regarded and famous musicians. His first Bogner branded releases were the three channel Triple Giant preamp, Fish preamp and then the Ecstasy amp series. Bogner Amplification was one of the first original boutique amplifier companies, and remains so now, even as a respected global brand. Not bad for a young kid with a big dream from a small village in Germany, and is a reminder to us all of how powerful our dreams, passion and talent are to our destiny."